Must visit for tourists from all over Brazil and other countries, the Paulistano Municipal Market is one of the most traditional gourmet spots in the city. And no less. In the Mercadão de SP, as it is affectionately known by its regulars, it is possible to find fresh vegetables, vegetables and fruits, as well as meat, poultry, fish and seafood, pasta, sweets, spices and imported products of the first line.

About the birth of the Mercadão icon, the mortadella sandwich. In 1933, the same year of inauguration of the market, an establishment was created by two cousins ​​of Portuguese descent. The place would only be known by its current name, Bar do Mané, in the 70’s, when it was taken over by Manoel Cardoso Loureiro, the son of one of the founders. Currently run by the third and fourth generations of the family, it offers a tasty codfish. But it is not by this delicacy that the place is known.

Legend has it that in the 1960s, during a banter between the staff, a sandwich came up with an exaggerated bologna filling. The exceptional snack aroused the curiosity, pleased the clientele and, in the following years, happened to be copied by many other bars and cafeterias of the capital. Thus was born a myth of gastronomy in São Paulo.

Municipal Market of SP from Fruits to Fish

Cantareira Market was designed to be a wholesale and retail trade warehouse, specialized in the commercialization of fruits, vegetables, cereals, meats, fish seasonings and other food products. However, his first function was to store gunpowder and ammunition. The building – which occupies an area of ​​12,600 square meters of built area on the banks of the Tamanduateí River – currently houses more than 1,500 employees who together move around 350 tons of food per day in its more than 290 boxes. The Municipal Market Paulistano operates from Monday to Saturday, from 6am to 6pm and on Sundays and holidays from 6am to 4pm. In the wholesale, it works from Monday to Saturday, from 10:00 p.m. to 6:00 p.m.

The fruits of Mercadão are the most famous of São Paulo, if not of Brazil. There you will find hundreds of options ranging from the most common, such as banana, orange and apple to the most exotic ones, most of which are imported like the Pitaya, also known as Dragon Fruit, which may have white and red pulp and is native to Australia and Asia, or the famous but not very popular in Brazil, American Curlew.

The high prices of the fruits of Mercadão is something that has been discussed and judged a long time, but according to researches and the permission holders themselves the quality of the fruit is incomparably superior to any other establishment of the city.

The variety of fish is not different from that of fruits, they are large boxes marking the delights of the sea and of rivers also, it is possible to acquire up to 10 varieties of shrimp, hundreds of fish such as salmon, tilapia, sea bass, sardines and much more of seafood such as clams, octopus, squid, crab and so on. The values ​​of sea flavors are judged by the public fairer compared to fruit values. 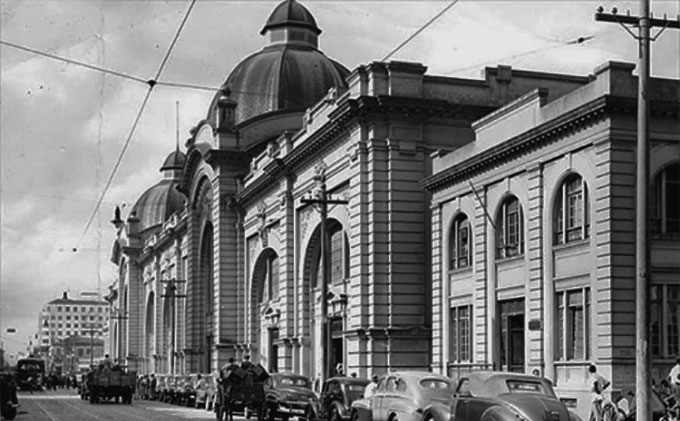 The gastronomic space offers the opportunity to taste tasty dishes right there, while appreciating the architectural beauty of Mercadão, which was designed by the engineer Felisberto Ranzini (head of the architectural design department of Ramos de Azevedo’s office), who is also responsible for Municipal Theater and by the Pinacoteca, and inaugurated on January 25, 1933 (also anniversary of the city of São Paulo).

The execution of the stained glass was given to the Russian artist Conrado Sorgenicht Filho, famous for his work in the Cathedral of Sé and 300 other Brazilian churches. In all, there are 32 panels subdivided into 72 beautiful stained glass windows. The permission holders – the name given to the merchant or merchant who is allowed to use the space to sell the products in the Mercadão boxes – have their interests represented by Renome, an association of private law, established for an indefinite period and not for profit.

An important historical and architectural building of the city, the Municipal Market also stands out today as a cultural and tourist center. Around 50 thousand people circulate there every week. In 2004, there was the biggest reform of the Heritage, which won a mezzanine of two thousand square meters (authored by the architect Pedro Paulo de Mello Saraiva), destined for the food square, with several kiosks for food and babies.

Already in 2006, through a partnership with the private initiative was created, in the mezzanine, the Gourmet Market, a fully equipped kitchen for classes and events linked to gastronomy. Musical shows, theatrical performances, handicraft fairs and various events have also been constant in the dependencies of the Paulistano Market, attracting the most varied public.